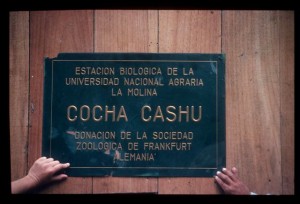 The idea of a biological station at Cocha Cashu was first conceived by Paul V. Pierret, Professor of National Parks and Wildlife at the National Agrarian La Molina University (UNALM) in Lima, in the late 1960’s. Marc Dourojeanni was his Peruvian counterpart. The idea was that the Institute for Forestry Research (of UNALM and the Forestry Service) would have a scientific base in the proposed Manu National Park. It was Rudolf Hofmann (visiting professor of the faculty), with the help of Augusto Tovar and students Manuel Rios (then student and later professor) and Jaime Evans who built the station with their own hands in 1969 (with funds from the Frankfurt Zoological Society). They were aided by the then Head of the Gran Parque Nacional Del Manu Reserve, Carlos Linares Bensimón, the first Head of Peru’s Protected Areas, and a boatdriver and carpenter from Pucallpa plus two workers from Boca Manu. Soon after, researchers and students from La Molina, amongst which Rudolf Hoffman as well as Augusto Tovar and Kai Otte (of the Frankfurt Zoological Society), came to Cashu to carry out studies on various themes, especially the black caiman. Manu National Park was formally established four years later, in 1973. 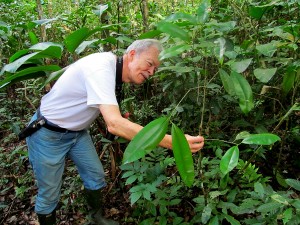 Cocha Cashu has hosted researchers from all over the world in a variety of disciplines. Dr. John Terborgh, Professor of Environmental Sciences at Duke University and an eminent authority on tropical ecology, operated the station (under the auspices of the Peruvian government) for more than 30 years, and personally conducted research on such diverse topics as primates, birds, jaguars and forest composition. During the first years of Dr. Terborgh’s management the original station was destroyed by the natural fall of a huge tree; John reconstructed the station along the same design. Over the years, his research and those of other investigators have produced an impressive body of work, resulting in over 750 publications.

Today, the Station is under new management. In 2011, San Diego Zoo Global signed a 10-year Memorandum of Understanding with the National Service for Natural Areas Protected by the State (SERNANP), thus launching a new era for Cocha Cashu

"Cocha Cashu was a paradise, with an absolutely magnificent view of the lake and a set of well-marked forest trials. The accommodation was very simple yet everybody seemed to be comfortable with it. There was a nice, enriching scientific atmosphere, with researchers from different parts of the world. Being at Cocha Cashu opened my eyes to the astonishing world of the tropical forests and to the greatness of nature and wildlife. The research I did at Cocha Cashu was without a doubt the most exciting and rewarding research I've done so far.”

Amanda De La Torre
“I was at Cocha Cashu in 1989 or 1990 with a team working on a manakin project.   I would have to consider it one of the best experiences of my career in biology. Cocha Cashu was a paradise. The bird and animal life was spectacular, and I loved the time spent on the lake and river especially when the otters were around, and swimming in the same waters as the caiman. It was a great opportunity to work with Peruvian students. Visiting with the local natives was another highlight. Because many other scientists were there doing other projects, there was a good opportunity to participate in other activities - bat mistnetting, botany projects, etc. I would encourage anyone who has the chance to take the opportunity to spend some time there.”