The idea behind TEAM is deceptively simple: to measure and compare plants, terrestrial mammals, ground-dwelling birds and climate using a standard methodology in a range of tropical forests, from relatively pristine places to those most affected by people. TEAM currently operates in sixteen tropical forest sites across Africa, Asia and Latin America supporting a network of scientists committed to standardized methods of data collection to quantify how plants and animals respond to pressures such as climate change and human encroachment (from the TEAM web page).

Since 2011 during the months of June, July and August TEAM has conducted assessments of forests in floodplains and terra firme near the Cocha Cashu Biological Station and Pakitza Guard Post. Populations of terrestrial vertebrates, vegetation and climate were evaluated. 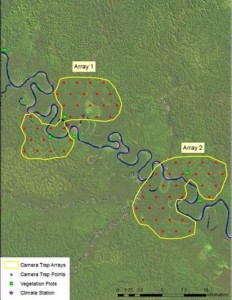 In the censuses of 2011 and 2012 approximately 570 species of trees and lianas with a diameter at breast height of more than 10cm have been recorded. The total number of stems censused is 3721.

Lizzy Kanashiro Diaz
“I was at Cocha Cashu in 1989 or 1990 with a team working on a manakin project.   I would have to consider it one of the best experiences of my career in biology. Cocha Cashu was a paradise. The bird and animal life was spectacular, and I loved the time spent on the lake and river especially when the otters were around, and swimming in the same waters as the caiman. It was a great opportunity to work with Peruvian students. Visiting with the local natives was another highlight. Because many other scientists were there doing other projects, there was a good opportunity to participate in other activities - bat mistnetting, botany projects, etc. I would encourage anyone who has the chance to take the opportunity to spend some time there.”